The project is owned by Ridge Consultants EOOD which executed an earn in joint venture and option to purchase with Raiden Resources. Raiden has a path to 100% ownership of the project.

In the period 1997-2000, Gramex conducted an exploration program in the Project Area, performing geochemical soil sampling, geological and alteration mapping, channel rock chip sampling over areas with outcropping mineralization, and a short drilling program of four shallow drill holes. Notably, the rock sampling results indicate that within the halo of lower grade mineralisation a number of higher-grade intercepts/zones are present.

Raiden Resources has reviewed all available historical data from that period to conclude that the Vuzel Project may host gold mineralization over significant widths, including zones with high-grade mineralization. On the basis of the historical results, Raiden Resources will be targeting outcropping high-grade mineralisation and aim to delineate the structures which control the mineralisation.

The Vuzel Project is an advanced gold target, with considerable extents of broad mineralization defined.

The zone of historical workings contains many adits, shafts, small pits and mining dumps, which are concentrated in the main target zone over an approximate one square kilometer area. Some of the best channel rock sampling results include: 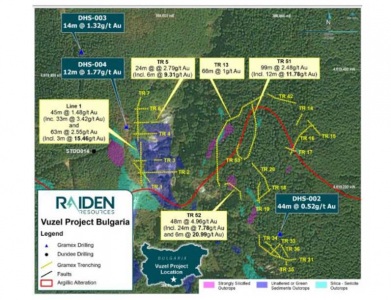 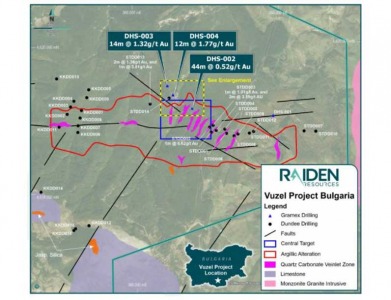 The Vuzel project hosts a significant low sulphidation epithermal gold target. The target has been defined by historical soil sampling, mapping and rock-channel sampling, all of which have defined a drill target over a 500x500m area. Raiden Resources is focused on proceeding with fast-track drilling activities, based on historical work. Despite the encouraging results, the target area remains largely unexplored

A further target, which has not been tested by either of the previous drilling campaigns, will be the basal contact between the outcropping sediments and the underlying basement rocks. Raiden Resources believes that this contact may provide a high-grade target, as this is an analogous setting to the high-grade zones at the Ada Tepe deposit (Dundee Precious Minerals), located approximately 30km to the east of the Vuzel Project

Copper porphyry mineralisation has been discovered within the Tertiary Dinaride-Aegean segments in all the neighboring countries, with the exception of Bulgaria. Given that the Kalabak project is situated within a similar geological setting and that it displays significant alteration features and geochemical finger prints, which indicate the presence of copper-gold mineralisation, the Company believes this is the consequence of a lack of exploration, rather than a lack of geologic potential.

The maiden drill program is in the planning stages and planned for 2021.

The target is characterized by anomalous gold values, which are continuous over significant widths and in some instances high grades. While historical drilling did encounter encouraging results, the Company believes that it did not test the full potential of the target and additional drilling targeting the high grade channel/rock sampling is warranted. The Vuzel project has many similarities to Dundee Precious Metals’ Ada Tepe deposit, which is also a low sulphidation epithermal style of deposit and is located only 35km from Vuzel. Ada Tepe is a high grade, open pit gold deposit, which became the first greenfield gold mine to be put into production in 2019 by a foreign investor – Dundee Precious Metals. 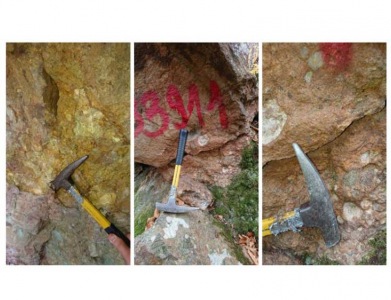 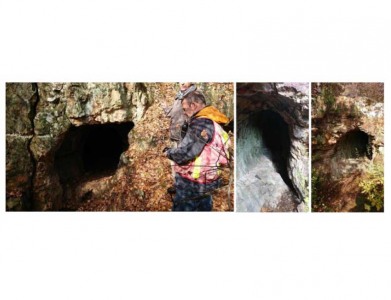