The exploration licence covers the area of Donja Nevlje, 275km NW from Belgrade and 51km SE from Sofia. The project is located within Dimitrovgrad the last Serbian municipality before entering Bulgaria. The Donja Nevlja Project is nearly 125km SE of the productive Timok Magmatic Complex, the host to the Bor and Majdanpek districts of copper-gold mineralisation. The permit covers the northern extension of a 25Km long belt of volcanic that hosts several well defined porphyry copper occurrences along strike to the south in Bulgaria (including in the Companies Zlatusha project).

Although the former-Yugoslav State Agencies conducted several exploration projects in the 1960’s and 1970’s, there is only limited data preserved from the work on soil and rock geochemistry, geophysical and petrographic studies, field mapping, channelling, and drilling.

During the period 2008-2011,  Empire Mining LLC performed a ground magnetic survey, with more than 21.6km2 and defined a very strong magnetic anomaly which remains unexplained to date. At the same time, Empire Mining undertook a soil geochemical sampling programme, covering much of the area explored during the 1960’s with an extension to the east of the ground magnetic survey area, having collected 225 samples on a 200x200m grid. Soil sampling continued in 2011 (272 samples in total), while Empire Mining also collected 15 rock samples from outcrops within the Donja Nevlja licence.

In July 2011, a Serbian contractor undertook an Induced Polarisation and Resistivity Survey for Empire Mining, on 3 profiles (dipole-dipole array at 100m spacing) that were selected to cover the main magnetic anomalies identified in the ground magnetic survey, as well as the locations’ yielding anomalous rock chip copper geochemistry. All these profiles reportedly yielded anomalously high chargeability over the locations with elevated copper in bedrock.

In 2013, Canadian-based First Quantum Minerals proceeded with a joint-venture with Empire Mining and assumed the surface rights to conduct only field reconnaissance activities and certain broad spaced geochemical surveys.

The Donje Nevlje Project Area is situated in SE Serbia approximately 125km SE of the Timok Magmatic Complex that is the host to the Bor and Majdanpek copper-gold mineralization districts. The company postulates that the mineralisation observed on the license is related to a blind porphyry or epithermal style occurrences. The initial program carried out by the Company consisted of 1,144 meters of diamond drilling, which defined initial zones of interest which will be followed up in the near term. 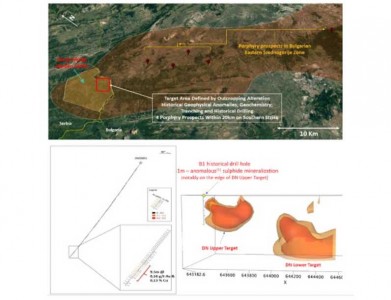 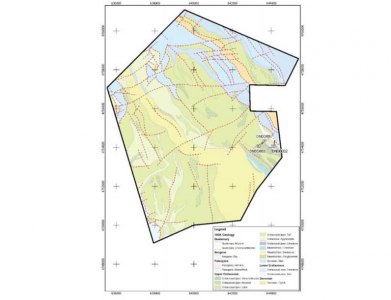 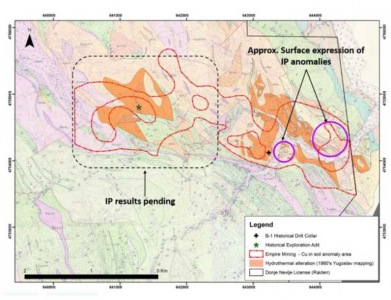 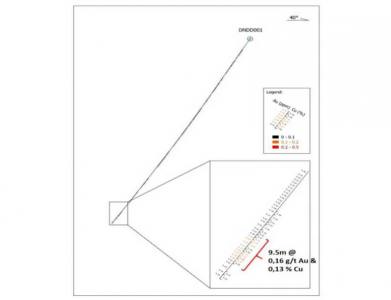 Intercept at the bottom of the DNDD001 hole

The data available indicates that the mineralisation is related to a blind porphyry or epithermal style occurrence. This hypothesis is supported by the location of the anomaly in the Cretaceous volcanic belt which is known to host this type of mineralisation. The pilot drilling intercepted mineralisation of 9.5m @ 0.16 g/t Au & 0.13 and the bottom of the hole.

The project area hosts the same upper Cretaceous Volcano-sedimentary sequence as the Timok Magmatic Complex (TMC) in the Bor-Majdanpek mining district and it has been subject to numerous exploration campaigns mostly during the 1960’s concerning a variety of targets. Raiden’s analysis of historical data (alteration and geological mapping, aeromagnetic and Induced Polarisation Surveys, trenching and soil sampling), follow up drilling of the anomalies was restricted to only two drill holes, both of which intercepted copper bearing mineralisation, but have not been followed up on to date. Given the lack of modern exploration on this Project and the fact that the Project’s Licence covers a long belt of volcanic that hosts four porphyry copper occurrences, Raiden has the opportunity to discover a blind porphyry and epithermal system.

Raiden Resources has executed a detailed soil sampling campaign on the western periphery of the Zupa license. Over 1,200 samples were collected on a systematic spacing that ranges from 100x100m2 to 200x200m2. The program targeted the contacts between the Triassic andesites and limestones. These contacts are known to host skarn mineralisation within the district, such as the Cadinje deposit, which is located just north of the boundary of the Zupa permit, as well as the Suplja Stjena deposit in Montenegro (approx. 30km NW of the Zupa project).

The soil samples were analysed with a portable Olympus XRF device in a controlled field laboratory setting. Based on this analysis, the program has defined a 6.5km-long geochemical anomaly on the SW flank of the project area. The anomaly is defined by a coherent zone of elevated Zinc in soil values, as well as coincident elevated lead and copper trends.

The initial program consisted of 1,144 meters of diamond drilling, which was designed to test the geophysical (Induced Polarisation) anomalies defined earlier in the year (refer to Raiden’s announcement on 9 April 2019). The best mineralised interval was intercepted in the first drill hole (DNDD001), which was designed to test an induced polarisation derived chargeability anomaly. Although an excessive ground water flow led to the early termination of the drilling before testing the lower parts of the anomaly, there was a successful testing of the anomaly’s upper parts.

The most significant intercept is presented in Table below.