The Majdanpek West and Majdanpek Pojas exploration licenses (covering 76Km2) are located in the norther Timok Magmatic Complex, near the town of Majdanpek.

The project are owned 100% by Raiden, through a Kingstown Resources DOO, a Serbian owned subsidiary company.

In 2018, a helicopter electromagnetic survey (VTEM) and an aeromagnetic survey was carried out over the Majdanpek West and M Pojas licenses, as well as extensive mapping, soil sampling and a rock sampling survey. The VTEM technique is effective for detection of massive sulphide lenses and connected disseminated sulphide mineralisation. Sulphides and clay zones within structures may be associated with the porphyry copper mineralisation, alteration and associated epithermal alteration zones. Some epithermal deposits, such as Cukaru Peki near Bor, are associated with large, massive-sulphide bodies. At this time the Company is evaluating all the targets and prioritizing top tier targets.

The Majdanpek West and Majdanpek Pojas project licenses are located adjacent to RTB Bor’s Majdanpek open pit mine, which is a operating large copper-gold porphyry. Less than 1Km to the south west of the project boundary RTB Bor have defined a prospect consisting of an epithermal related Cu-Au-Ag-Zn massive sulphide body of unknown size and grade (Coka Marin). The exploration program on the project will be targeting similar style of porphyry and epithermal style mineralisation. 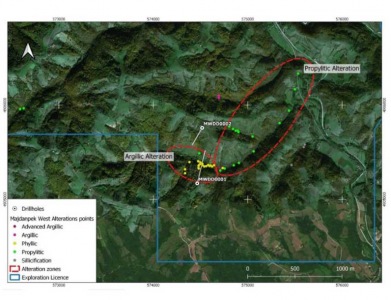 Figure 2 Location of the drill collars within the zones of alteration on the Leskovo South prospect. 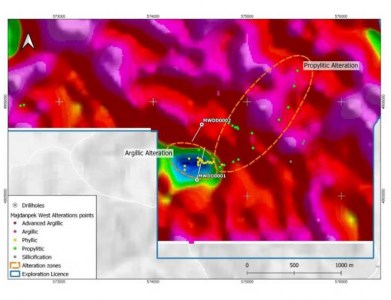 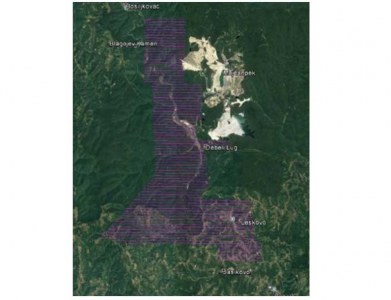 The Cretaceous andesites in the southern part of the Majdanpek West licence are prospective for epithermal and porphyry style Cu-Au deposits.

In 2019, scout drilling results on the Majdanpek West Project (Leskovo South) defined by an outcropping zone of phyllic and argillic alteration and an associated magnetic anomaly. Drilling has intercepted zones of alteration and elevated Cu and Au values and further geophysics planned to assist with possible future refined drill targeting. These initial results were encouraging and indicated that the Leskovo prospect may be associated with a blind porphyry or epithermal system. To date, only a single drill hole tested the drill target, which intercepted encouraging alteration zones. Further geophysical targeting work will be undertaken on the prospect to guide a possible second phase of drilling on this exciting target, which is located only a few kilometers away from several significant deposits within the Timok Magmatic Complex.