The Project Area is in the SW part of Serbia, covering approximately 99km2 on the border between Serbia and Montenegro.

The Zupa license is 100% owned by Raiden Resources, through Kingstown Resources LTD, a 100% owned Serbian subsidiary.

The project is in early exploration phase but with defined targets which have not been drill tested to date. The polymetallic (Zn-Pb-Cu) target on the western edge of the permit is drill ready, and the Company anticipates that with additional work, further targets will be defined throughout the remainder of the permit.

The Zupa Project is considered prospective for polymetallic skarn, intrusion related and porphyry mineralization. The project is located in the Dinaric Metallogenic Province which is experiencing an exploration revival with new high-grade discoveries in Bosnia and Herzegovina (Adriatic Resources). Raiden Resources has  secured  large prospective ground position in Serbia and has defined a large poly-metallic geochemical anomaly on the Zupa project. Further work is expected to define more key targets. 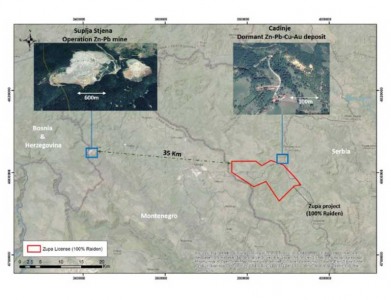 District setting of the Zupa project area in relation to the Suplja Stjena deposit (currently in operation), and Cadinje (dormant deposit). 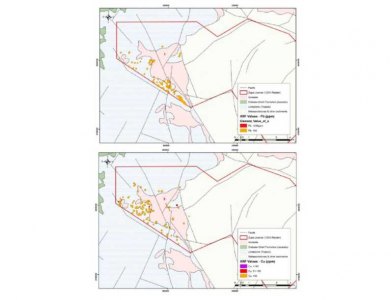 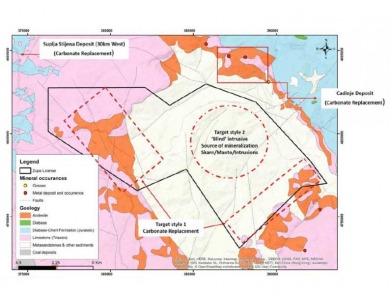 Geology, structure and mineral occurrences of the Zupa project area. 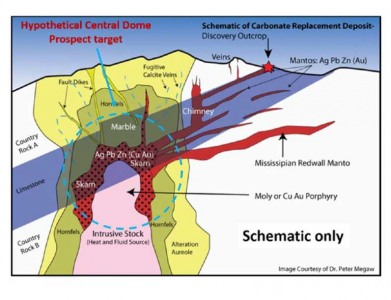 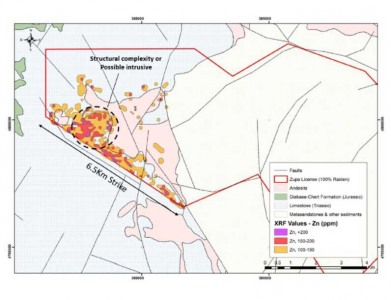 West Zupa zinc in soil anomaly with underlying geology, which indicates that the Zn anomaly is associated with the contact of the andesites and the limestones. The anomaly may be related to skarn mineralization.

The far western region of Serbia related to the tenure is dominated by an Ophiolite Belt. The tectonic margin of this belt is marked by a buried structural corridor west of the terrane and is known as the East Bosnian-Durmitor Block. Together, these two domains form the Dinaric Metallogenic Province (“DMP”). The East Bosnian-Durmitor Block comprises Triassic sedimentary rocks, limestones and volcanics. Although these differ in age from the Bor metallogenic Zone in the east, they are considered prospective for analogous deposit styles, as well as replacement and skarn mineralisation.

The Zupa Project is dominated by Carboniferous-age meta-sandstones in structural and unconformable contact with Triassic limestones and volcanics. A NW striking structural corridor runs through the western portion of the project. The western structure occurs proximal to a mapped area of pyritic alteration, indicative of hydrothermal alteration. Notably, this is also observed in the structure which cuts through the eastern side of the permit and is associated with skarn/replacement-type (Cu-Au-Zn-Pb) mineralization at the Cadinje deposit, which located approximately 2km to the north of the Company’s Zupa project.

Raiden Resources has executed a detailed soil sampling campaign on the western periphery of the Zupa license. Over 1,200 samples were collected on a systematic spacing that ranges from 100x100m2 to 200x200m2. The program targeted the contacts between the Triassic andesites and limestones. These contacts are known to host skarn mineralisation within the district, such as the Cadinje deposit, which is located just north of the boundary of the Zupa permit, as well as the Suplja Stjena deposit in Montenegro (approx. 30km NW of the Zupa project).

The soil samples were analysed with a portable Olympus XRF device in a controlled field laboratory setting. Based on this analysis, the program has defined a 6.5km-long geochemical anomaly on the SW flank of the project area. The anomaly is defined by a coherent zone of elevated Zinc in soil values, as well as coincident elevated lead and copper trends.