Boodalyerrie is located 78 kilometres northeast of Nullagine and 113 kilometres southeast of Marble Bar in the Pilbara region of Western Australia.

Exploration has comprised surface sampling (stream sediment, soil and rock) and geological mapping as well as airborne geophysical surveys. Soil sampling in 2013 defined widespread north-south to NNW-striking gold anomalies, with several small ENE-striking anomalies overlying the granitoid-greenstone contact. Individual anomalies are up to 2 kilometres long and several hundred metres across. Very few historic rock samples have been collected within areas of soil gold anomalism and no holes have been drilled to test them.

The Boodaylerrie property covers an extensive area of demagnetisation and alteration accompanied by prominent quartz veins to 10 metres wide on the southern margin of a tonalite batholith. A historic chip-channel sample returned 3 m at 88.6 g/t Au; grab samples returned up to 200 g/t Au. Numerous historic gold-in-soil anomalies remain to be tested; the largest is 2 kilometres long and several hundred metres across. 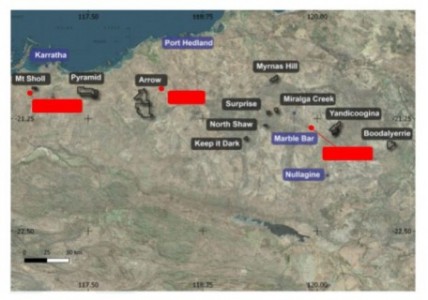 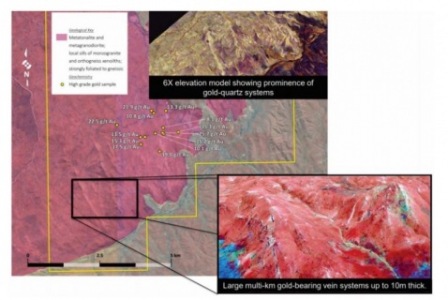 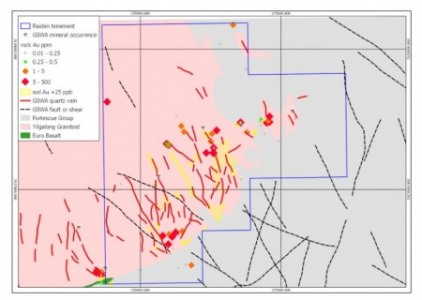 Boodalyerrie covers part of the Paleoarchean Yilgalong Granitoid, with a sliver of Paleoarchean greenstone (Euro Basalt) in the southwest corner. The eastern third of the property is blanketed by post-orogenic Neoarchean Fortescue Group rocks.

Demagnetisation associated with hydrothermal alteration forms an extensive band 6-8 kilometres wide over the southern margin of the Yilgalong Granitoid. Prominent quartz veins occur sporadically within this alteration zone, but as a dense swarm on the Boodalyerrie property. At this stage, the relationship between surface gold anomalism and the quartz veins is not clear.

Near the southern edge of the property, the Fortescue Group unconformity approximately overlies the granitoid-greenstone contact. Extensive alteration and gold anomalism in the granitoid could extend beneath shallow post-mineral cover in to adjacent greenstone rocks, presenting additional targets to be tested.

Field verification of soil anomalies and evaluation of the prominent quartz veins.